How to Enable MPD Track Ratings on Void Linux

Some MPD clients such as Cantata support giving tracks ratings as seen below. If you haven’t set up MPD yet, have a look at my other post “How to Set up MPD on Void Linux”. 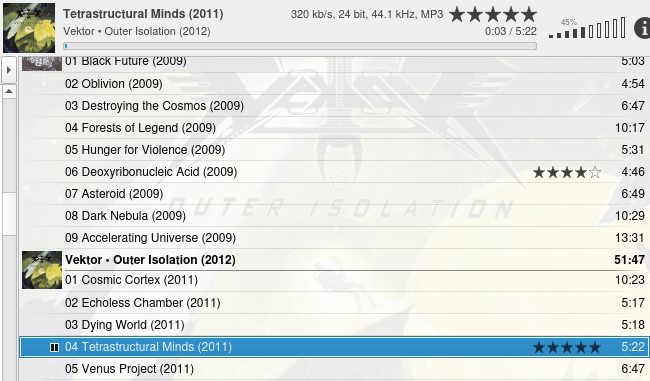 In Cantata, track ratings are enabled by going to the menu on the right or Edit in the toolbar, then Preferences > Interface > Toolbar > Show Track Ratings. Upon enabling them, I got an error message saying that this version of MPD “does not support stickers”. Here is how I fixed it.

Building and Installing from Source

Void Linux’s MPD package does not support stickers because not everyone wants them, so making everyone install the SQLite database on their system is unnecessary. If we want track ratings, we need to enable SQLite support for MPD and then recompile it from source ourselves.

Void Linux uses xbps-src to build packages. There is a quickstart for setting up the build environment on Github. As it says, you will need to clone the void-packages repository and then cd into it and run ./xbps-src binary-bootstrap, which might take a few minutes.

Once that finishes, the srcpkgs/ directory has the tools and recipes to build every piece of software available through xbps (plus a few more even).

We are messing with the MPD package, so open void-packages/srcpkgs/mpd/template in your text editor. Now there are three lines we need to change:

This tells the build system that we want SQLite support. The -Dsqlite flag is documented here.

To switch to our version with SQLite support, uninstall the previous package with sudo xbps-remove mpd. Next, install the version we just compiled with sudo xbps-install --repository hostdir/binpkgs mpd. The old version is still probably running on your system, so you may need to pkill mpd so that the new version starts.

As you have seen, Void Linux makes it very easy to reconfigure packages and build them yourself. If you ever run into a similar problem with a package not supporting an option you want, try a similar approach.